For years call recording software vendors all over the world utilized network-based recording to record CUCM phone calls. The “network-based” approach is also known as “active recording” or “SPAN-less recording” and is actually based on media-forking feature supported by the most of Cisco IP phones and also Cisco Unified Border Element (CUBE).

The media forking approach is loved by all call recording vendors:

But still, till now Cisco IP phones and CUBE only forked media to one destination. This is finally changed in Cisco CSR 12.5! 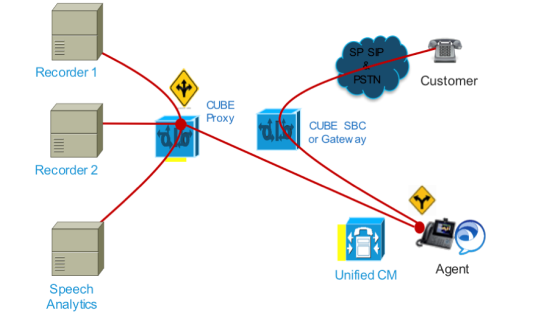 Media forking to multiple recorders is a new CUBE feature supported by IOS XE 16.10.1 or later. What’s the idea?

The new CUBE feature is called “media-proxy” and allows CUBE to receive media forked by Cisco IP phones (equipped with built-in bridge) or voice gateway and stream the received media to several destinations simultaneously in real-time. You can configure up to 5 destinations which will receive the forked media.

What is also important: