The Updated Paging Solution for Cisco UCM Reaches Anyone, Anywhere

The new Aurus PhoneUP 3.11, the bundle of apps for Cisco UCM, is released this week! Congrats to the R&D team!

As for me, the main killer feature of the new version is the integration of its Paging module with our Outbound solution. Finally, we can offer a paging solution that reaches employees wherever they are.

See how it works:

1. When a new message (text, audio or hybrid) is sent to the predefined group of employees, it first goes to their Cisco IP phones. Every IP phone of the group plays the audio alert, shows the text message on its display and plays the audio message through the speakerphone.

2. Then the message waits for the employee to confirm the receipt with one of the following methods:

3. Those employees who have not acknowledged the receipt are sent to Aurus Outbound along with the message content.

5. After listening to the message employees confirm the receipt by sending a DTMF code or recording the voice message.

6. Once the outbound campaign is over, the PhoneUP generates the combined report and sends it to the message originator by email. 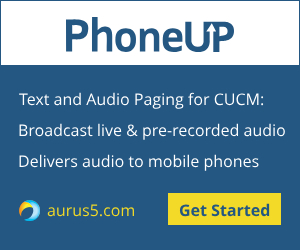 There is a number of ways you can leverage such a notification system: